On May 5th 2008, the Town’s newsletter printed an announcement that showed the Town of Chapel Hill and UNC partnering to build a new men’s homeless shelter on the old Duke Energy site located at the corner of MLK Bld. and Homestead Road. The property was purchased by UNC and would be leased to IFC for 50 years at $1 per year.

This announcement took Homestead Park Area residents by surprise.  They had never heard of this plan and few details were available until the following year.  No public notice or participation occurred for this siting process despite the sizable percentage of public funds that were used to build the new shelter.  Over $2M in public funding were approved by Chapel Hill, the State of North Carolina, and the federal government.

Downtown Merchants and Chamber of Commerce Members wanted the shelter out of downtown and did not care where it went as long as it was out of downtown.

For many years, the downtown merchants in Chapel Hill have been plagued with panhandling, loitering, and drug use issues.  One merchant was so fed up with these problems that he sawed off the public bench in front of his establishment and was subsequently charged with damaging public property.[1]  There has been much pressure to move the homeless shelter out of downtown.

UNC and its foundations own a significant portion of downtown real estate, such as the recent $46M purchase of Granville Square.

In the spring of 2008, the UNC Foundation announced that it was purchasing a $46M parcel in downtown Chapel Hill for a large redevelopment project: the foundation will invest hundreds of millions of dollars.  The foundation simultaneously announced that UNC was donating land to move the shelter away.  Roger Perry, chair of the UNC Foundation and member of the UNC Board of Trustees whose organizations authorized both of these transactions, was credited by the shelter developer as the person who acquired the land for the shelter.

UNC will most certainly benefit with the shelter no longer being one block away from its foundation’s new $250M+ development which will generate revenue for the university.

The Town of Chapel Hill had many reasons to want to shelter out of downtown.

The town wants its building back after letting IFC use the building for 25 years.  This building is prime real estate that’s needed in a time where our town needs revenue from assets like this. The town had also established a primary goal of championing downtown business and revitalizing Franklin Street.  Town plans have a new transit hub next to the downtown shelter location.  The town also invested $13M in land and money in the LOT 5 redevelopment project, luxury condos whose top floors overlook the existing shelter.

“The over-concentration of social services may lead to fewer positive impacts for both residents and those seeking social service programs, which is the opposite of the positive impacts expected from efficiencies of scale when like services are provided in close proximity.”   American Planning Association Zoning Practice, January 2010

It’s not surprising the new homeless shelter was sited in the Homestead Park Area in north Chapel Hill.  This area is home to several middle class neighborhoods, a public housing community, three trailer parks, two large student apartment complexes, two churches, and a large park. These neighborhoods are the most ethnically diverse in Chapel Hill and include the largest concentration of Asian residents in North Carolina. Many of these residents are new to the United States, many cannot vote, so the Homestead Park Area is historically a politically weaker area than others in Chapel Hill.

The Homestead Park Area is home to the county’s only women’s shelter.  It is also home to Freedom House, the county’s only residential drug center which detoxes 850 clients per year in an on-site program and provides drug rehabilitation, on-site addiction counseling to thousands per year, and on-site halfway house facilities.  With the coming addition of a new men’s shelter, this area will soon host, in one-fifth (1/5) of a square mile, every at-risk overnight social service in the 400 square mile county.  About half of the clients at these facilities are residents of the county and half of the clients reside outside of the county.[2]

Homestead Park area neighbors support the women’s homeless shelter in the neighborhood and many participate in PORCH and attend local churches.

With the addition of the new men’s shelter, this area will support more than their fair share of at-risk housing and services.  The town council was unwilling to acknowledge that the Homestead Park Area has reached its carrying capacity for at-risk overnight social services and provide assurances that future facilities will be sited with fair share guidelines.

After the new shelter was announced, the town council voted to change the Land Use Management Ordinances (LUMO) to accommodate this new project.  LUMO changes were not needed to approve the shelter but they provided key changes to help the developer. The changes removed legal protections that existed for the neighbors and allowed the town council to avoid having to specifically declare “findings” to override the ordinances in the project approval.

Anyone who listened to statements by the mayor, town council, the chamber of commerce, or the developer of this proposed project, would have been led to believe that the old emergency shelter was closing down on Franklin Street and a new transitional-only facility was being opened without the emergency shelter.  But that was not the case.  Homestead Park area residents soon discovered that some written materials contained details (basically footnotes), that said the new facility would be both a transitional and an emergency shelter.

Many neighbors began to distrust IFC’s spokespeople when they continued to represent white flag nights as rare occurrences in meetings which spanned many months before succumbing to pressure and finally confirming that they actually housed white flag night residents on 197 nights in the prior year.  Neighbors began to ask questions about the impacts of having a large, dual-purpose facility in light of the existing facility, but answers were not forthcoming.  Even to this day, due to the way that IFC promoted the facility as a transitional facility, many residents of Chapel Hill are not aware that the emergency shelter is a component of this new facility.[3]

Facts emerging about the new shelter were troublesome. The shelter was large; it would serve 500-600 men per year which could create loitering around the neighborhoods and park. On “white flag nights” men would be admitted without a government-issued photo ID and would be accepted overnight even if they were drunk or high.  A study of arrest records revealed the existing downtown shelter had the 2nd highest number of arrests for the five year prior to the study.  IFC published flawed crime studies by Christa G. Polczynski Olson which were missing crime in key areas, confused the actual locations of key sites, and concluded that the location with the highest rate of sexual crimes in Chapel Hill is in a particular location which she did not know is actually the Chapel Hill Police station.

The Homestead Park Area residents did not anticipate the extreme to which IFC and many of its supporters would falsely paint the neighbors as being against the plight of homeless people rather than concerned citizens who had questions and issues with the site as well as the concentration of similar facilities.  The neighbors wanted to talk transparently about risks and assurances, but IFC chose instead to denigrate the neighbors.[5]  Homestead Park Area residents concerns were labeled as “fear” despite the fact that downtown merchants and Franklin Street visitors have complained for years about crime, panhandling, loitering and aggressive behavior.


More Problems with the Site

The new men’s shelter is located within 1,000 feet of two child care facilities. Sex offenders are not permitted to live near child care facilities.  These rules pose multiple problems for homeless men and the community. Sex offenders cannot participate in IFC’s transitional housing program so there will be nowhere for them to go in Orange County.  IFC says they won’t house homeless offenders on white flag nights but since they don’t require government issued ID’s (IFC will give its clients IFC-made ID’s) these laws cannot be enforced.  This leaves offenders out in our community or near childcare facilities if they choose to use the shelter.

The new men’s homeless shelter was a done deal back in 2008 when it was announced, but the Special Use Permit (SUP) approval was the final step IFC needed to build the new shelter.  On May 5th 2011, area residents filled town hall and provided significant evidence trying to convince town leaders to site the facility or at least the emergency shelter portion in another part of town since Homestead Park already had other at-risk facilities.  Over 1,200 Homestead Park Area residents signed a position asking town council to find a better site for the new shelter.  IFC hired a lawyer to refute the facts and diminish neighbor concerns.  There was little debate and town leaders asked few questions because they had made up their minds long before the SUP evidence was presented.

SUPs contain stipulations defining the allowed use of the property and any mitigation which must occur. The neighbors submitted stipulations to be added which they drafted with the help of an attorney who possessed the appropriate expertise, but these stipulations were ignored by planning staff and council.

In the agenda published two business days before the final hearing, the town council added a resolution to create a “good neighbor plan” to assure neighbors the new facility would be well run with a level of transparency.  However, council allowed the neighbor plan to be completely controlled and written by the developer.  This plan was never voted on by the committee and provided no protections for Homestead Park Area residents.  Town council promised the neighbors that IFC would be held to the same standards as any other developer, but council would not dream of giving any other developer complete control of such a document.

One participant summed up the concerns of the neighbors during council review of IFC’s neighbor plan:  “What if, against all good intentions, something bad happens?  What is IFC promising the neighbors that it will do?”  The answer is nothing.

On June 11, 2011 the developer’s permit to build the new shelter was approved.

Neighbors presented evidence at both of the Special Use Permit quasi-judicial hearings.

Our "Lessons Learned" is a must-read for citizens who are trying to navigate town and political processes. 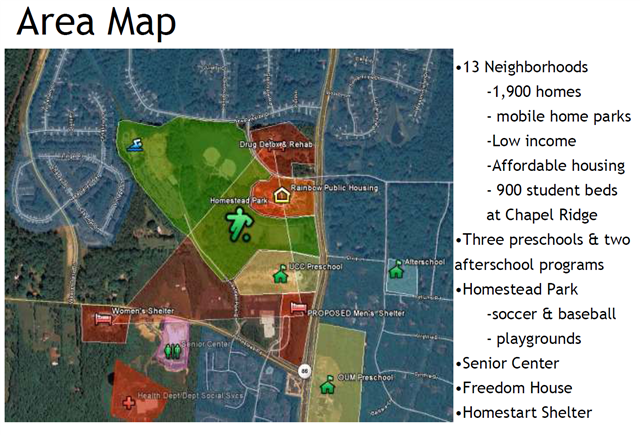 In addition to documenting the unfinished business and the facts about this particular project and process, we provide useful information for other citizens and neighborhoods in their attempt to be heard and represented.

Nothing is more powerful than hearing the story first hand, complete with detailed facts and records. 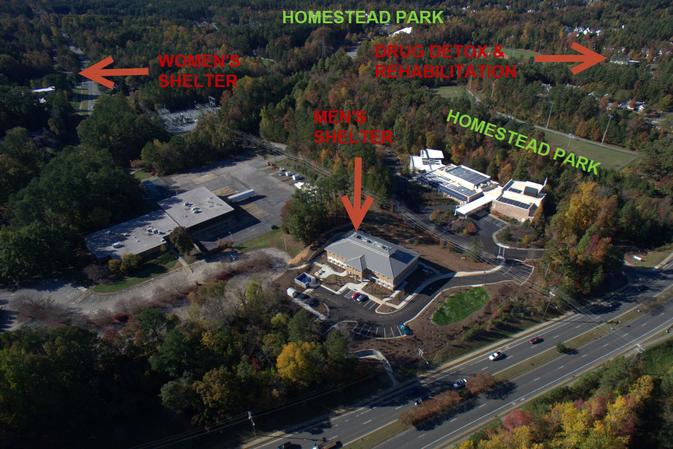 Unfortunately, this was not the case.